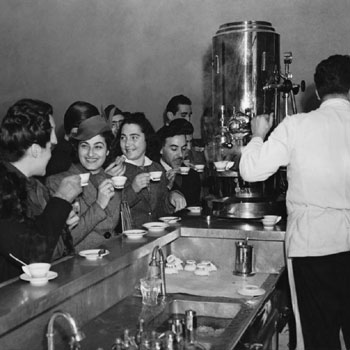 As we continue to highlight and re-publish articles from the past twenty years on CoffeeGeek, one of our earliest columnists and contributors was Aaron De Lazzer, who was a trainer and coffee roaster in Vancouver, first for JJ Bean, and then for Ethical Bean Coffee (where today is he is the Director of Coffee) De Lazzer helped co-write our immensely popular Milk Guide (which is being re-written from scratch for publication this year), and a regular columnist on CoffeeGeek for its first three years.

How I Became a Coffee Geek was Aaron’s second column on the website, originally published just days before our website’s official launch in early February, 2002.

De Lazzer talked about a journey that many of us felt familiar with at the time: from a Tim Hortons coffee drinker, to discovering the early Starbucks (and even working there) to eventually getting hired by JJ Bean, a Vancouver chain that, today, has over 20 locations today (back when De Lazzer wrote for us, they had 5).

We’re featuring De Lazzer’s short article, not so much because of it’s content (it’s pretty brief) but because of what Aaron De Lazzer meant to me (as the founder of this website) and the early days of CoffeeGeek.

He’s one of the main people who initially taught me how to cup coffee, which I’ll never forget, and always appreciate. I can remember many occasions being at JJ Bean’s cupping room, up in a cramped second floor loft at their main roastery location, working back and forth between cups, learning how to slurp, how to break the crust, and how to search for nuances as the coffee cooled down.

De Lazzer also taught me some basic principles of being a barista, including how being a professional barista differs greatly from a home barista. Those principles he taught me early on aided me in eventually becoming a certified barista judge in the USA, Canada, and as a World Barista Championship certified judge, in 2004.

De Lazzer and I worked our butts off on the original Milk Guide for CoffeeGeek, an eight page guide published in early 2004 that ended up being an industry bible for a time, teaching new baristas about the principles and methods of foaming, frothing and heating various types of milk and milk substitutes. De Lazzer is the one who mainly came up with the “stretch the milk until the pitcher is the temperature of your hand” modus, to maintain maximum sweetness in the milk foam; he also worked with me and the UBC Scientist we enlisted to learn more about the chemistry and reactivity of milk and heat applications. His work on the original guide was so detailed, that when we re-write and published the entirely revised guide this year, De Lazzer will still be listed as one of the authors, some 18 years later.

De Lazzer and I used to be close (we had a falling out, those things happen), but I can recall us doing a few road trips, almost on a whim, to Seattle and Portland to attend some barista event or regional trade show, and having a blast. I even remember driving home at midnight, and arriving back in Vancouver at 3am, because we were too cheap to get a hotel room to stay and extra night.

De Lazzer was an important, integral part of the launch of CoffeeGeek, and I’ll always appreciate him for that and for his friendship back then. On top of the article featured above, we have a few other of his writings revived with this new version of CoffeeGeek: