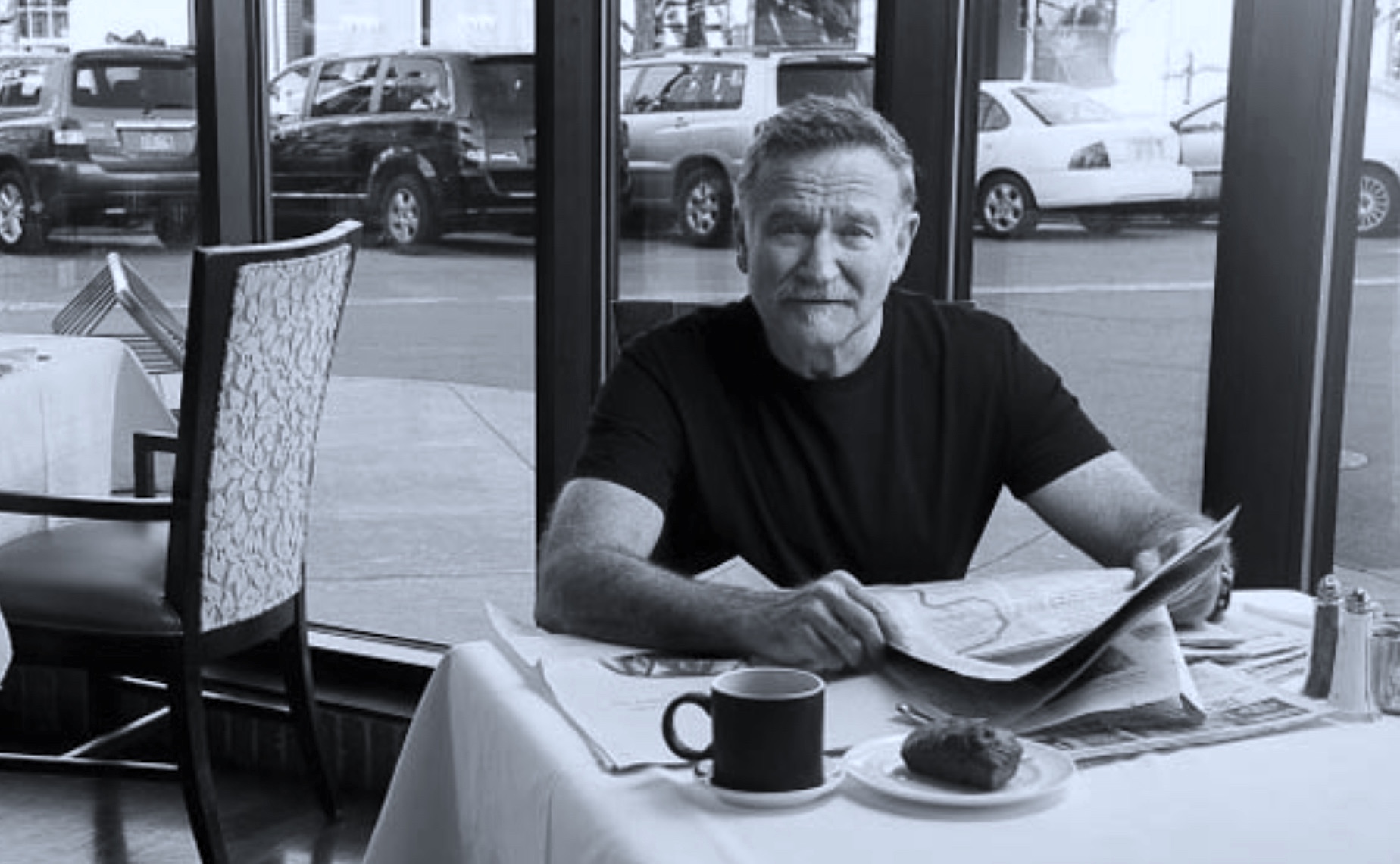 In the course of running CoffeeGeek, we found out that a few celebrities here and there were actually fans of the website and on a very personal note, this made me quite proud of what we’d done with the community and the information we published and shared. Probably the most famous person ever to read CoffeeGeek was also a slightly-regular, anonymous poster in our forums for a time: Robin Williams. And there’s an untold back story here which I want to share and make public for the first time, on our 20th Anniversary.

Around 2004, I got an email from someone using the name Robin Williams, asking about some questions on an auto drip machine (a Technivorm, if I recall correctly). I duefully answered them, and ended the email with “wouldn’t it be crazy if you were actually the famous Robin Williams?” I got an email response back with the word “busted!”. Left me really confused, so I wrote back asking if he was the Robin Williams. He claimed he was, and on top of that, showed me that he had been taking part on the website but under a pseudonym account, in our then-new forums.

To be honest, I felt it was a ruse, and just left it at that. I couldn’t believe someone like Robin Williams would not only be a reader of CoffeeGeek, but also someone taking part in discussions in our forums.

Then in 2006 or so, my friend Keith, who managed the ComicShop on West 4th in Vancouver rang me up and told me to get my butt down to his store, because the Robin Williams was in the shop and holding court (Keith didn’t know about the email exchanges, just that I should get to the store to see this famous comedian and actor). I did, and lo and behold, Robin Williams was there, doing improv comedy and making everyone laugh their guts out.

Of course I hung around, and just as the shop was closing up, Williams was paying for the massive amount of comics he bought (he was a collector). Keith introduced me and when I got a chance, I asked Williams if by any chance he read the CoffeeGeek website and sent me an email a few years ago.

Yup. It definitely was him.

And on top of that, his reaction when he found out who I was probably blew about half of my brain cells to oblivion. He was so enthusiastic and excited to meet… me!?!! He said he was a fan, said he read everything on the website, learned a ton about coffee and espresso, and enjoyed taking part in the forums just as a “normal” as I remember him putting it. It absolutely blew my mind.

One thing I always regretted about that was I didn’t have the thought right then and there to ask him if we could do an interview with him, or even better, have him as a guest on the podcast. At the time, I recorded a monthly podcast from my home, and we had other famous people on it (from the coffee world), but just imagine a Robin Williams on the CoffeeGeek Podcast? I bet he would have said yes too (after all, he practically lived in Vancouver around that time).

But I didn’t. And I never did. I didn’t want to fan-boy out on him. I did however continue to answer his occasional questions the few other times he emailed me (last one was in 2008). I thought it was better if I just treated him like normal and didn’t impose, mainly based on the conversation I had with him at the comic shop two years before.

I cried — literally cried — the day Robin Williams died. Someone who brought so much joy to the rest of us, but couldn’t find his own joy, and hid that inability so, so well. We lost a giant.

My shyness and hesitance in engaging Williams to be interviewed or a guest on the podcast stuck with me for several years after my last interaction with him, and it was a regret. Which is why I had no hesitation about asking the next famous person I knew was a CoffeeGeek fan for exactly that: an interview I could publish on the website. And that famous person was Steven Page, of the Bare Naked Ladies (and since then, a fantastic solo career).

Around late 2008, I was aware that Page read CoffeeGeek and that he was a serious home espresso nerd, but how I found out escapes me this day. This was still before Twitter was really a thing and Facebook had just gone to public access a year or two before. All I know is, Page got my contact email and had sent me a few emails asking about how to get the most out of a La Spaziale espresso machine.

We interacted back and forth and this time, I didn’t hesitate and wasn’t shy – I asked him if we could do an interview for the CoffeeGeek website. Well, we did, and Page even shot a few photos of himself in his kitchen, with his LaSpaz machine behind him for the interview. And here it is, originally published in April, of 2009.

Since then, Page invited my wife and I to two of his private shows in Vancouver and Victoria, and I’ve been able to give him some excellent coffee as a thank you on both occasions; and I also got to witness just how gracious and fantastic he is with fans, one example which I will share with you now.

Page was hired to do a fancy private corporate function at the Cactus Club Cafe English Bay Beach location during one of the Festival of Light Fireworks competitions in Vancouver around 2009 or 2010, and he invited my wife and I to it as guests. It was super posh and exclusive, and I felt entirely out of place (my partner looked fabulous and fit right in). Page, who smoked back then, during the middle break in his performance invited me to go with him to stand right outside the entry gate area on Beach Avenue because smoking was not allowed in the closed off (but outdoor still) facility.

So we were out there, talking and nerding out about coffee and espresso, when a woman runs across the street and engages him. She was a total super fan of the Bare Naked Ladies and Page, and saw him from the balcony of her condo tower across the street. And let me tell you, she was seriously losing it – Beatlemania losing it – over meeting Page in person. It was almost scary.

Page was absolutely perfect in that moment (remember there were no cameras around, this is before smartphones took off, no one to record his interaction or take note of it). He acted almost as enthusiastic as she was, yelling ‘I can’t believe I’m meeting YOU!” to her, asking her name, giving her a massive hug, and actually having a conversation with her – an enthusiastic, fun conversation. The woman was almost literally in heaven. This went on for a solid five minutes.

Then Page’s manager came around and told him it was time for the second half; the woman remembered that she brought a BNL music CD and wanted him to sign it but forgot a pen. Page asked his manager to find one. One was found, and he signed the CD and then posed for a photo with her (she brought a digital camera as well); I was the one who took the picture. Page then said goodbye, and gave her a huge hug and thanked her for being a fan.

The entire time I stood back and soaked all of that in. How Page made that woman – a kind of crazy, dishelved, nondescript person – feel like the most important person on the planet. How absolutely genuine he was with her. How delighted he was to interact with her. After, as we walked back inside, he told me he never got tired of that.

I’ve had conversations and interactions with Page since that time, but I’ve never told him how witnessing that incident turned me into a super fan of his. Not a super fan of his music – that was already set in stone (The Chorus Girl from his 2010 Album Page One is one of my all time favourite songs of his) – but of him as just a genuinely good human being.